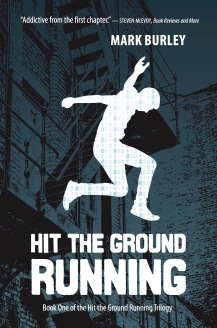 “Eric—Mom and Dad are gone. I don’t know what happened, but I’m going to find out.”

Eric might not be getting along with his family—or anyone else, for that matter—but he’s pretty sure a boarding school in another country isn’t the answer. So be it, he decides. Do the time and get out. Flow like water. But when he gets a cryptic message from his brother telling him their parents have been abducted, and then his brother disappears, he realises they weren’t punishing him, they were hiding him. To find them, Eric has to discover the secrets of his parents’ research, but the conspiracy he uncovers threatens more than just his family. With help from unlikely new friends, he soon learns that some secrets don’t want to be found, and others have a way of revealing themselves at all the wrong times. 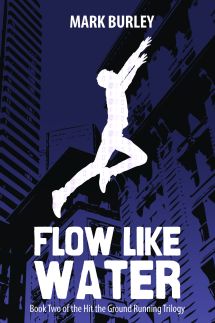 Book Two of the Hit the Ground Running Trilogy.

Eric Bakker’s search isn’t over. The conspiracy revealed by his parents’ research goes deeper than he could have imagined, into a place and an organisation with as much history—and secrecy—as any in the world. Getting in won’t be easy, and he’ll need help from his friends more than ever. But when one of them commits a personal sacrifice so Eric can escape from the killers known as the Vidi, the fallout threatens to split the group apart.

Tess has been there from the beginning, but with the addition of Angel, the daughter of another researcher, she begins to doubt her role. Soon after, new information about her father’s death puts her at a crossroads that will force her to choose between Eric’s search for answers and her own.

For Eric, overcoming physical and mental obstacles is built in to his parkour training philosophy, but the farther he goes in his search, the bigger the obstacles become. What he eventually discovers no one was ever supposed to find. Ultimately, his path leads to a violent encounter in Sicily, this time with no plan and no idea what he’s up against. Eric knows that whatever he encounters, he will have to adapt and react. As the saying goes, he will have to be like water. And like water, he will flow or he will crash.

Book Three of the Hit the Ground Running Trilogy.

“Eric—get inside and lock the door. The Vidi are coming.”

Eric Bakker has his family back. Not everyone was so lucky.

All of the Bakkers owe their lives to the mysterious John Williams, a friend and colleague of Eric’s parents. So after Williams is critically injured during their rescue, they will do whatever is necessary to help him survive. His only chance is to return to the place that made him what he is, in a remote part of Norway where even the locals are afraid to go. But it isn’t easy to travel through Europe with someone who appears to be dead, and the longer it takes, the less likely it is their plan will work.

With a trail of death and destruction spanning multiple continents behind him, it’s understandable that the authorities would be after Eric, and it’s only a matter of time before they close in. Fortunately, his friends Tess, Seth, and Lakey have his back, but fast thinking and cool tech only go so far.

As everyone with a stake converges, Eric will need one final push to save Williams before the killers known as the Vidi bring an end to all things. Deep inside a mountain far to the north, Eric will find out which myths and legends are true, and which are just stories. But the answers only matter if he makes it out alive.

Mark is originally from Truro, Nova Scotia. His parents were teachers, which means he could have grown up around books, and he did, but mostly he marked biology tests for his dad and dissected whatever they had for dinner (true story). He attended Dalhousie University in Halifax to do his science degrees and continued to cultivate the writer seed planted as a kid. He’s always been involved in high-level sport, as an athlete through university and as a coach afterward, and he maintains that sport has given him the chance to succeed in art, something he’s sure he couldn’t have done otherwise. As a result, though, he eats the same breakfast every morning and he always puts his left shoe on first—bad things will happen if he doesn’t.

Mark and his wife live outside Halifax with their two children. Books are big in their house; Mark’s favourite thing is Bedtime with Ry (come on, Mom, who can sleep during the Quidditch World Cup?). As a reader, he’s always been slow, preferring to savour, which drives his wife nuts—she’s a devourer. He is often drawn to books that are beyond his ability to comprehend, which is only frustrating when the words aren’t beautiful. He also has an unnatural attraction to chai lattes. It’s a problem. He’s OK with it.

To contact Mark, email him at Mark [at] MarkBurley [dot] ca or through this form, or connect with him on Facebook through the link below.

For distribution inquiries or other information from Blue Moon Publishers, contact Merle at Marketing [at] DigiWriting [dot] com.